You are not connected. Please login or register

» The New Setup at our Townhouse

A center for my mom

A center for my mom

Well, I've decided to scrap the pandas. It's just too much for me to do right now. Aside from the complexity, I don't have the money to tinker with such large crossovers. Instead I'm going to part out the pieces and build 4 other speakers. As for the enclosure I already had built, my mom suggested it could be a nice bird house or feeder.

So... My first speaker will be a center for my mom. She and her fiance just moved into a new house. I wish I would have known their plans for a sound system, but it was too late when I found out. As it is, they have all built-in ceiling speakers with a small Polk (I think) center. The ceiling speakers are pretty permanent, so I can't do anything there, but I can do better, I hope, than that little rinky dink center. Here's what I'm using:
Vifa XT tweeter
2 5.25" Rocket woofers
Erse EQ 18ga inductors
Jantzen caps with a Dayton Film and Foil .01uF bypass (smallest Parts Express has)
Dayton resistors (these aren't non-inductive like Mills, but, from what I read, they should be fine for this project. Mills would have nearly doubled the cost of the crossover.)
Walnut Melamine (I'm curious to see how this looks. It's definitely cheaper than veneer.)
I'll make a grill since they might not appreciate the look of bare drivers. It will be magnetic with magnets inside the MDF, so there won't be any visible connecting points.
It'll be front ported with the tweeter off-set (imagine the Bigfoot configuration but with a port instead of another driver) so they can shove it in a shelf with no back spacing.

Everything is on order. I'll get the MDF once I've finalized the box dimensions.
mobileusa

Do you have a pic or drawing of the configuration and layout? I'd be interested in seeing it!
CloudStrife 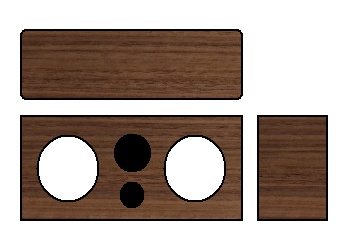